Here is a collection of news articles and editorials, primarily from my time at Duke. 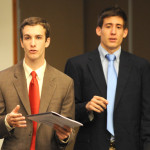 Duke College Republicans chairman claims he was ousted because he is gay.  Daily Tar Heel, April 19, 2010