Throughout his term in office, President Ronald Reagan made it clear that he was a force for change, from the way he publicly denounced the Soviet Union to his emphasis on family values and conservatism.  A man borne out of the technological high-class world of Hollywood, Reagan came to symbolize the rise of a new movement which captured the soul of America and dramatically altered the political landscape.  As the “solid south” waned in favor of the Republican Party, which became more sympathetic to white southern conservatives and blue-collar workers, so too did the era of free love, pure “participatory democracy” and excessive liberalism.  And as more Americans became dismayed by the perceived depravity of the New Left in the 1960’s, Reagan’s conservatism message had no trouble finding eager ears. 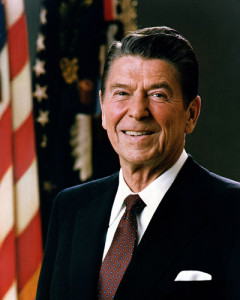 Reagan started talking about things in a way that was profoundly new to Americans. He called the Soviet Union “evil” and refused to apologize for American might – in fact he greatly increased American interventionism and military spending.  He attacked “stagflation” and promised a new era of economic prosperity built on individualism and less government regulation.  Though taking intense criticism for his sharp new policies, particularly in foreign policy (Docs 5, 6), Reagan was successful in communicating his message to the nation as his “Cold War Patriotism” caught hold.

Reagan used an inherently ideological agenda to rouse the country in support of a new course; he rallied conservative Christians out of the political shadows from the 1960’s, and he took advantage of several weak predecessors who had failed to either build an enduring party legacy or tackle the Cold War with any meaningful vigor.

In many ways, Reagan’s movement was reactionary.  He watched as the federal government consistently let down the American people.  Assassination, Vietnam, Watergate and the gas shortage combined to sap the trust of ordinary people.  In 1979, President Jimmy Carter very accurately captured the “crisis of confidence” gripping America.  “The erosion of our confidence in the future is threatening to destroy the social and the political fabric of America,” he declared.

Carter reminded Americans of the tumultuous events of the previous two decades; he cited the “growing disrespect for government and churches” and he lamented the destructive effects of inflation. (Doc 1) Yet he offers little hope.  He conveys no program, no inspiration, nothing to return America to greatness.  Instead he only asks for “faith in each other, faith in our ability to govern ourselves.”  This speech epitomizes Carter’s failures and his inability to sustain liberalism or effectively combat America’s growing problems: President Carter expertly understood the gloom hovering above the nation and he exuded the same frustration of average Americans, yet Carter was ineffective in providing what American’s expect from their Chief Executive: a solution.

And along comes Reagan. Ronald Reagan’s unique ability to convey a persona – a message – provided a stark contrast from Carter’s lackluster charisma.  Using language that glorifies the American spirit, Reagan spoke of “a new concept of leadership” which will provide not “pious hopes wrapped in soothing words, but [rather] the hard work and concerted programs necessary for real growth.” (Doc 2) With such confidence, Reagan exudes hope and assurance.  While certainly ideological, Reagan is not naïve.  He clearly identifies the vast issues confronting America as “a disintegrating economy, a weakened defense, and an energy policy based on the sharing of scarcity.” By restricting government spending, reducing taxes, and fixing monetary policy Reagan planned to restore confidence by reversing the trend of liberalism following the New Deal and Great Society.

In replacing the New Left and the counterculture, however, the Conservative movement – separate from the Republican Party – combined innovative strategies (direct mail, coalition politics, etc) with earlier successful tactics of their political foes.  “All the New Right has done is copy the successes of the old left,” argued conservative leader Richard Viguerie.  Just as the New Left used the Civil Rights Movement, the environment and consumerism to rally single issue groups to form a united collection of activists, the Conservative movement rallied around its core issues, including right to life, taxes, the second amendment, national defense, and “family values”.  Importantly, however, the rise of conservatism witnessed the growth of “multi-issue” groups, which were broad-based compilations of supporters who adhered to a spectrum of Conservative ideals.

Finally, the Conservative Movement of the 1970’s – continuing through Reagan’s Presidency – changed its relationship with the media. Whereas the press had been historically liberal-leaning and antagonistic towards the marginalized conservatives, the movement recognized that to “play in the big leagues” and to have “a major influence on American policies” they would have to become comfortable with the media.  As the relationship improved, conservatives showed an ability to learn from the success of the New Left and they sought to extend their coalition by focusing on common – rather than divisive – traits.

Reagan took advantage of the fragility of the New Left.  Admonishing those who have “turned to modern-day secularism”, he claims they were merely louder than the rest of the nation, yet they did not represent a majority of Americans. Furthermore, American’s were fed up with the rebellious attitude of the counterculture. In Reagan’s view, this, in part, led to a “great spiritual awakening in America, a renewal of the traditional values that have been the bedrock of America’s goodness and greatness.”

The New Left Movement scared many Americans and returned the Communist threat to political importance as many college campus leaders were actively calling for a communist Revolution. Reagan’s incredible rhetorical skill labeled him the Conservative leader, with his optimism, hope and firmness. Though not without its troubles, American history was “the story of hopes fulfilled and dreams made into reality…America has kept alight the torch of freedom, but not just for ourselves but for millions of others around the world.”

Teeming with ideological purity, Reagan was not just the Republican leader – Reagan was the leader of a social Revolution. He witnessed the rise of liberalism and helped hasted the eventual collapse of the counterculture. The Conservative movement must be placed in its historical context to appreciate its efficiency and achievement. Learning from the rise and fall of the New Left, Conservatism focused on what made America great. It did more than just talk about the problems facing the nation; Reagan and his Revolution set out an ambitious agenda vastly different from anything America had ever seen.

Renewing the anti-communist pride of the 1950’s, appealing to the traditional values trampled on by the counterculture of the 1960’s, and ushering in a fresh era of unapologetic military might and small government, Reagan’s ideology captured America in a whirlwind of confidence. On the heels of failed liberal agendas, Conservatism channeled ideology into action, and it transformed the structure of politics for decades to follow.

Note: this essay by Cliff Satell on the Reagan Revolution and rise of conservatism in the 1970’s and 1980’s was originally written  for “Modern America” a Duke course taught by Prof. Michael Alsep in November 2007. It has been updated slightly.