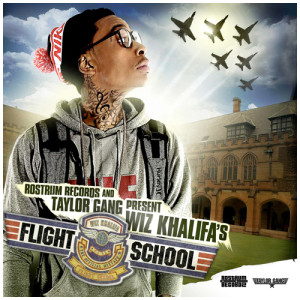 Wiz Khalifa, born Cameron Jibril Thomaz, has quietly been gaining a large underground following since 2005.  A creative rapper with a passion for witticisms related to weed culture, Khalifa is based in Pittsburgh and has established himself as a legitimate force in rap after a highly successful mixtape in 2005 and his first album in 2006.

A busy professional, Khalifa has been one of the innovators in the music industry in utilizing new media like YouTube and Twitter.  He took advantage of these online resources by frequently releasing videos of his songs as well as a web mini-series about his life with his friends.  Before age 22, Khalifa had taken the work of his self-proclaimed influences like Jay-Z and Notorious B.I.G. and infused his own modern twist of hip-hop.

Khalifa’s productivity was reflected in 2009 when he released three new mixtapes with over 50 new songs. As a result of this volume of work, Khalifa demonstrates his versatility by varying his song structures and taking creative risks with uncommon instrumentation and effects.

A great example of his Khalifa’s creativity is his most well-known song, “Say Yeah,” a single that reached the top of American rap charts. “Say Yeah” is rather typical of most of Khalifa’s widely distributed songs.  Formulaic, each verse is 24 bars long while the chorus is 16.  He makes use of a short bridge and then returns to the chorus. Structured almost as if it were a classic rock song, the song follows much of the traditional expectations of popular music.

But after the final chorus, Khalifa uses an extended coda that does not resolve but instead fades out.  This lengthy coda is also typical of Wiz Khalifa’s work; more than most hip-hop artists, Wiz has a tendency to lean on spoken word sections at the end of some of his songs – usually just to show his personality.

This structure does not typify all of Wiz Khalifa’s work, though. His mixtapes often contain compilations of remixes where he uses the beat of another artist’s song and raps on top of it.  Often, these tracks are just one long verse with no discernible sections, per se.  For example, he takes the beat from the song “Knock You Down” by Keri Hilson and turns it into a relatively short two minute freestyle rap.  There is no chorus, rather for at least 48 bars Khalifa raps one verse.  A choppy, witty style helps him produce lots of different effects in order to keep the song interesting and compelling.

One of my favorite Khalifa songs is “Buss Down,” which is a great example of Khalifa’s ability to take over a track with his lyrics yet still maintain the needed variation that makes it hard to stop listening to the song. Almost hypnotic, “Buss Down” has a very repetitive “chime-like” element in the beat which repeats the entire song.  The drums are simple and repetitive, though they drop out a few times near the end of a phrase during his verses.  After a long intro which lasts 16 bars, Khalifa raps uninterrupted for 44 bars before the chorus is heard. Interestingly, this song puts a lot of emphasis on the fourth beat of every major.

The chime-like element begins a new cycle on the latter half of the fourth beat of the measure. This links each section of the song nicely, as the continuity in chords and beat remains stable throughout virtually all the song. The subtle change in the snare and bass drum become predictable after hearing the song, as a listener can hear the very same sequence repeat over and over. Because of this, the weight of adding musicality and complexity to the song falls to Khalifa and his lyrics.

Khalifa’s lyrics do not usually tell a story.  In many ways the opposite of a hyper-articulate story-teller like Eminem, Khalifa uses his songs to paint a picture of what’s immediately around him.  His tracks describe his life, introduce his listeners to his songs, and more generally, he’s just trying to be a spokesman for his Pittsburgh crew (Taylor Gang) and share his lifestyle.

He is descriptive and thoughtful, though his lyrics clearly are intended for a specific niche audience which shares at least in part his views and lifestyle, especially as it relates to weed. (And it’s hard to argue his expertise – he claims to spend 10 grand a month “easy” on weed.)

Wiz is rarely vulgar, but not out of sensitivity to political correctness.  His honesty comes through clearly since his songs tend to be mellow but upbeat, up-tempo and his style exudes a disarming friendliness.  He is appropriately pompous, yet in general his main message is that he wants to do what he wants and you should do what you want.  He brags about his own life and circle of friends, but he rarely extends that to specific insults or calls to violence.  He intelligently uses spoken words – sometimes with entire phrases, but usually with his catchphrase “Okayyy!” or “Yeahhhh!” popping in as links between sections or also as standalone parts of a verse.

Wiz will often repeats certain phrases or words, especially at the end of a musical phrase to add emphasis and clarity. In addition, this vocal repetition becomes part of the rhythm as his voice adds variously different elements to the usually-static and simple beat.

In the song, “Get Sum,” Khalifa shows his musical range. The song opens like a techno song, with a heavy downbeat on each beat. An electronic voice repeats “get some” at a distorted pitch.  However, after a 16 bar intro, the verse resolves to a more standard rap beat with just a bass drum, simple electronic keyboard and a very basic rim-shot.  The chorus is highly distinct from the verses because of the change in beat: each chorus returns to the techno-like feel.

This song is very electronic as well; in addition to the keyboard (which is very rhythmic as well, often oscillating between two notes for several measures in line with the chord progression) Khalifa infuses obscure effects – sometimes at seemingly random times – that draws the listener’s attention briefly.  The faster tempo works for both the techno-chorus and the rap-verses as Khalifa finds an interesting balance that few could pull off as well.

In addition to his lyrical and rhythmic talents, Khalifa also uses auto-tune – nearly always an insufferable novelty – in creative ways.  In “Weed Roller” the majority of the song is reminiscent of an R. Kelly marathon story in that the vocal style is closer to singing than rapping.  The song is lazy in tempo but uses the electronic effects very subtly to create an R&B feel.  The lyrics are natural, his vocabulary is very reachable and the melody is pleasant, leaving ample room for Khalifa’s efficient verbal creativity to shine through.

Other Wiz songs make absolutely no use of electronic effects, but instead rely on a background chorus to express the chords. In most of his songs, the drums are exceedingly simple, again reinforcing the attention on the lyrics. Often the drums consist of only a bass drum plus a low-key snare and nothing more.  He makes good use of harmony in his more traditional songs that do not use electronics as much.  A decent singer himself, Khalifa sings on top of a background female chorus in “The Checkpoint.” Yet the simplicity is what makes the choruses in the song work; his vocals essentially go between two adjacent notes and elaborate little more.

Wiz Khalifa has only just begun his ascent into the mainstream rap community.  By using innovative new technologies to reach his fans, Khalifa is leading the charge from a new generation of artists on social media.  Bringing his unique blend of wit, simple beats and electronic effects right to his fans, Wiz is among the best at connecting directly (and consistently growing) his loyal fan base. Perhaps his greatest strength is his ability to stay insanely productive without boring his listeners.

Articulate, young and clever, Wiz Khalifa is poised to become a major player in the music world in the next decade. His style is –forward-thinking; his sound will come to be distinct from the hip-hop of the 1990’s and 2000’s as he helps establish the new sound of the 2010’s.  By building on his major influences like Biggie and Jay-Z and meshing them with his own weed-centric brand of rap, Wiz Khalifa is quietly establishing his own place in hip-hops pantheon of innovators.

Note: this was originally an essay on Wiz Khalifa by Cliff Satell for “Art of Song” a Duke music course in Spring 2010.  It has been updated slightly.