As a graduate of Duke, I’m not a fan of the legal system in general, and particularly the “criminal” side of things, including traffic citations. Here is a story, folks:

After getting into an accident, my old car had to be replaced. The accident was not major, but it did a lot of damage to my car because of the location of the contact. Police showed up and eventually both cars were towed away (the other car was a large SUV that suffered minor damage to the rear bumper.) The other driver and I both gave insurance info to the police, they filled their report, the scene was cleaned up and we went on about our business.

It was one of those things… stuff happens. Very annoying, very stupid, but it happens. I was not hurt at all, nor was the other driver. The damage could be replaced (in theory). But since my car was behind the other car, I knew that as far as insurance was concerned, I would probably be held responsible. However, I had not been drunk, was not talking on my phone, was not speeding or weaving in and out of lanes. We were going no more than 25 miles per hour at most. The police were relatively friendly and professional.

So imagine my surprise when a couple of weeks later I open my mail to find a careless driving citation. Considering none of the police officers made any mention of careless driving, or asked me any questions relating to possible careless acts, I was shocked. There had been no mention of a violation, or even the question of a violation, let alone an arrest or anything. The ticket was written days after the accident and mailed to me. Strange, to say the least.

Of course, I wasn’t going to pay the fine and accept the three points on my license since I had not violated the law. And my car was the one that had to be totally replaced (which was a month-long nightmare), not that that is relevant to culpability. My family and friends thought I should just pay the stupid fine and be done with it. But I was truly appalled by the way these cops acted as if they were deities.

They can send anyone a citation or ticket and claim you broke the law. Doesn’t much matter what the evidence is, assuming there even IS any evidence. The system is screwed up – all about ego and power and very rarely about justice, or the public’s best interest. I did not learn all that many things at Duke, but Duke is damn good at teaching you that.

Anyway, the first hearing date was continued by the state because the cop couldn’t show up that day. It was rescheduled to this week. I researched the careless driving law in the state. And guess what? I was unable to find a single case where similar facts had led to a careless or reckless driving citation. The law was crystal clear that there had to be “more than a mere lack of care” on the part of the driver; to be guilty beyond a reasonable doubt one must display such lack of care as to make a reasonable person think the safety of people might be in jeopardy (paraphrasing). So I was confident.

When I showed up to the hearing – which was a good 45 minutes away and I was unfamiliar with the area – the receptionist greeted me with a frosty, “Name?” “Cliff Satell,” I responded. She looked down, contorted her face, glanced at the clock on the wall and deadpanned: “You’re late.” Yes, Madame, that was true. I was about 10 minutes late. And my experience with these hearings are that they never begin within 20 minutes of the scheduled time. But, she was right. She gave me a flippant gesture that reminded me of a doctor’s office receptionist warning that, “Well ok, you can sit down, but we’ll see if he sees you!” Fine. I sat down and waited.

A short time later, the rather morose looking cop came out and called a few names, including Cliff Satell. I went to a back hallway to talk to him and without even making eye contact with me, the officer – cliché mustache/waistline and all – informed me that this offense carries 3 points on my license. So, he was graciously offering me a deal that would include zero points, but I’d plead guilty to the “same set of facts.” Not entirely sure what he meant by that, I made a comment to the effect of, “Ok, but I don’t think I was careless.” He retorted that since my cellphone went off right before the crash, that I was automatically guilty. Yeah, not exactly, coppo. 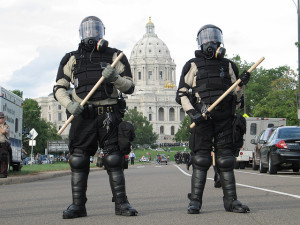 We went back and forth for a minute before he ended it by saying, “Fine, we’ll have the hearing.” I’m sure it was meant to be intimidating, as if I’d made a huge mistake. I was still pretty sure I would be fine.

So I had to go into the courtroom and basically conduct a trial. First, the cop went up to the stand, was sworn in by the judge and testified. I was allowed to cross-examine. The cop did not like my questions, which were surprisingly good, in my humble opinion. My Mock Trial days at Duke surely helped. All closed questions; succinct and clear; made him say “yes” or “correct” to virtually every question. I was also polite and not defensive, surprising even myself.

Then, I testified. I explained what had happened and why the law was on my side. The cop attempted to cross-examine me. He clearly was not a lawyer. His first question was something like, “So am I to believe that this is everybody’s fault but yours?” My answer: “Absolutely not.” He moved on.

His questions were mostly just establishing the basic facts, like that I was driving, that no one else was in my car, and that we were driving southbound on the road. Ok… cool. Then he went into some lecture type of mode. He even said directly at one point, “You see, the point I’m trying to get across to you is…”. Now, obviously, you can’t do that. So I just let him finish his paragraph-long soliloquy and the simply asked the judge if that was a question. It had not been. The judge told him to move on and stick to questions.

Finally, I got down and the judge allowed me to go right into closing arguments. I didn’t even sit down. So I wrapped up a 2 minute argument about my research, what the law requires for guilt, and the fact that the cop had failed to meet his burden. The cop just somberly repeated the facts for his closing. And he never stood up when addressing the judge. HUGE no-no, I don’t care who you are or what court you’re in.

The judge then proceeded to ramble quite passionately for 10 minutes about his experience as a cop for 18 years and a judge for 20. He had heard defenses like mine all the time, he said. And, “research is all well and good, and it’s great that you did it, but” what they don’t put in the searchable records are the cases that don’t get appealed. All the regular simple cases that are dispensed with the first hearing, either through a deal with the cop or a guilty verdict (or, I suppose, a not guilty verdict).

Then he smiled, leaned over his desk and loudly asked us what the only issue that mattered was. It was something neither of us (me or the cop) had even mentioned, he bellowed. He waved his hands indignantly as if he could hardly comprehend the absurdity that was a cop and a defendant not being able to read his mind. Since he was looking at me mostly, I stood up and softly said, “culpability?” No. Ah, my bad and I sat down. Kinda awkward. Turns out it was the following distance. Was I driving too closely to the car in front of me that I hit? The issue wasn’t a distraction like a cell phone ringing; there are a million distractions every drive and rarely do the lead to hitting things… because you’re not supposed to follow so closely that you cannot react to a distraction and not hit something. So since I hit somebody in front of me and I had been distracted slightly, he implied there was a prima facie case that I was following to closely, and therefore, being careless, and, therefore, guilty.

BUT, he reminded everyone that I had to be proven guilty beyond a reasonable doubt. And since there was no third-party witness, and the cop had not seen the accident himself (and there was absolutely nothing in the record to this point that I had been following to closely… a point I would have contended anyway), the judge said I had to be held: