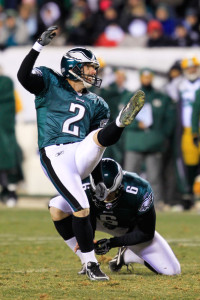 Last night I saw the scroll on ESPN that kicker David Akers signed a multi-year deal with the 49ers.  I know he’s getting old, had an inconsistent season last year, and muffed two very crucial playoff field-goal attempts against the Packers, but still.  He’s the Eagle’s all-time leading scorer and has played in more games in an Eagles uniform than anyone else.  During the last decade, he is the NFL’s leading scorer.  And it turned out his 6 year old daughter had a malignant tumor that was diagnosed right around that Packer playoff game.

Since I can remember, David Akers has been the Eagle’s kicker.  Except for that one time he got hurt and they had position players kicking for a couple of games.  Going to games, I used to watch him warm-up two hours before the kick off.  He’d start relatively close, easily knocking down 30 yard tries.  Then he’d move back to 38 yards, then 45, then 50, then 55, then 58, then 60+.  And he would always nail it.  For a small guy, he has one hell of a leg.  For years he was as sure as anything the Eagle’s have had.

And he is a good guy.  He never moaned, threw teammates under the bus, criticized his coaching staff or ripped the fans.  He was one of the easier guys in the NFL to like, mostly because he did his job better than anyone else and did it for a long time.  Obviously, he’d on the decline, though, and just like when McNabb, Iverson, Recchi and Brian Dawkins left, it was definitely the right time to move on, however sad it makes fans.  He is the last remaining vestige from the 2004 Superbowl team, too, which puts the nail in the coffin of the most successful era in Philadelphia Eagles history.  And any honest assessment has David Akers securely in the top echelon of the best Eagles players of the 2000’s.

The Eagles did try to keep him, by placing the “transition” tag on him.  But since he apparently lost a ton of money in a bad investment scheme, Akers declined the tender.  And when the Eagles drafted a kicker in the 4th round of this year’s NFL draft, it was all but inevitable that Akers would have to find work in another city, despite his professed desire to want to retire as an Eagle.  But it is a business, after all.  And he chose to head out West to join the, um, powerhouse 49ers where he’ll kick at Candlestick Park.  [Note: … guess the joke’s on me, the 49ers went to the Superbowl last year and lost to the Baltimore Ravens.

Eagles fans should remember how Akers won the 4th-and-26 game in 2003 against the Packers or how his magnificent onside kick opened the 2000 season against the Cowboys to make the beginning of a new era in Eagles’ history.

Eagles fans should also remember the consistency that Akers, whose field goal accuracy is a career 81.9 percent and has only missed six extra points in his 12 seasons in Philadelphia.

As a Eagles fan, it will be very different not seeing the veteran from Louisville in the No. 2 Eagles jersey, but it is a change that was coming and as the last member of the 2004 Super Bowl is almost certain to leave Philadelphia this off-season, the time for change is now, and I, on behalf of all Eagles fan, would like to thank David Akers for everything over the 12 years he spent in Philadelphia as a model of consistency and veteran leadership to the Philadelphia Eagles franchise.

Well said Joe.  Thanks David Akers for doing all that you did in your 12 years playing football here.